Being denied a Schengen Visa rightly makes many applicants feel powerless and vilified. Most of those affected by a rejection apply in the firm belief of fulfilling the entry requirements and have the firm intention of abiding by the relevant visa laws. To make things worse, a number of applicants lose a small fortune in prepaid flight tickets, application fees and other costs they incur in the course of applying for their visa.

What can be even worse than that, however, is for an applicant to not even know the reasons why an application was denied, when previously many hours were spent preparing a convincing documentation of their case. Unfortunately, this is a grim reality faced by a number of applicants, as many Member State embassies have in the past repeatedly failed to provide sufficient information regarding the reasons for applicants’ rejections, although this is in violation of the Schengen Visa Code they themselves must abide by.

When rejecting a visa application, Member State embassies are obliged to provide the applicant with a standard form, on which they first have to note the category under which the reason for rejection falls, followed by a line reserved for text, in which the visa officer has to note their analysis of the case specific details speaking for a rejection. These details must relate to the applicant’s handed in documents, the statements made during the visa interview and other information that is on file about the applicant.

Since the recent February 2020 reform of the Schengen Visa Code, the standard rejection form should always look similar to this: 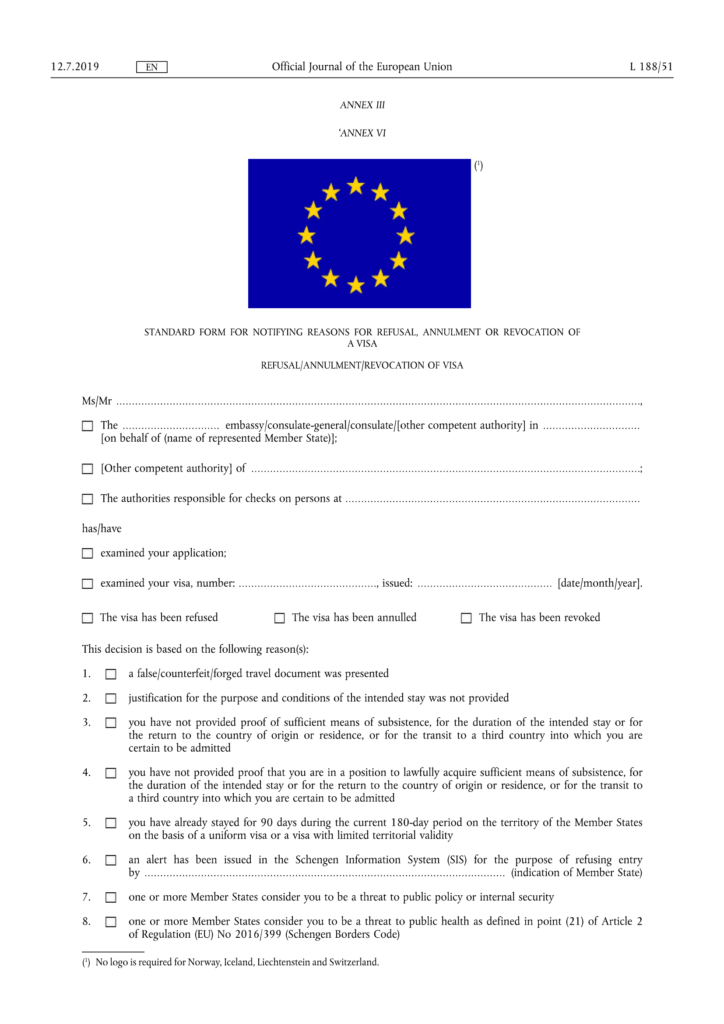 Previous to the 2020 reform of the Schengen Visa Code, an older version of the document existed, which only stated 9 reasons for rejection. Both versions, however, have the same problem: they make no mentioning of the applicant’s informational rights under European and Member State law. Applicants that do not have in-depth legal knowledge consequently are left in the dark about the fact that they have the right to a detailed explanation regarding their visa rejection, and this is quite problematic.

Although no official numbers on the matter exist, it is quite likely that most denied applicants receive rejection notices based on reason 13 (formerly reason 9). Reason 13 states that there are “reasonable doubts” as to the applicant’s intention to leave the territory of the Member States before the expiry of the visa. This, of course, is an unsubstantiated blanket statement that falls short of providing any sort of information the applicant could use to convince the embassy of the opposite.

The most invested watchdog, of course, would be the applicants themselves. However, for the applicant to ensure that their informational rights are being respected, they would have to know of the existence of such rights in the first place. Many applicants, however, do not have the time, capacity or resources to engage in a lengthy legal research process. This, in turn, fully plays into the hands of the Member State embassies. They can count on the fact that many applicants will become disheartened to appeal their rejection notice, because they are unaware of the reasoning based on which their application was rejected.

The best way to further exemplify the problem is to use an authentic document from a 2018 German Schengen Visa procedure (unfortunately the document was only made available in German language):

The embassy is obliged to create a prognosis of your likelihood to return [to your home country]. The documents provided by you do not suffice to attain a positive outcome with regards to this prognosis. The embassy regards

The above letter therefore demonstrates a concrete example of how a responsible visa officer only refers the applicant to the general Schengen Visa admission criteria that state that the applicant must prove their social, professional and financial ties to their country of origin. This information is already public knowledge and applicants are aware of it before applying (why else would they be providing documents in the first place).

Aside from that the statement, the letter contains absolutely no personalized information relating to the case. What the applicant naturally needed from the officer was

What follows is that the worth of the applicant’s right to appeal is now seriously tainted. They can still appeal the decision and hope that the next visa officer dealing with their application will take a different decision; however, they cannot

In any nation state that confesses itself to the principles of the rule of law, such deliberate withholding of information should be seen as an abuse of power. This is especially the case in the context of the Member States embassies already enjoying an unusually great margin of discretion when evaluating Schengen Visa cases, even up to the point where administrative courts have hardly any means left of overturning a negative decision.

it's a right, not a favor

Provisions for ensuring access to information exist both in European and various national laws. The information you can find on our webpage is non-exhaustive, meaning there may be additional legal pathways for you to explore.

In the Schengen Visa Code:

As can be seen above, recital 15 of regulation 2019/1155 clearly spells out that the Member State embassies are obliged to present the applicant with detailed information pertaining to the circumstances of their specific case via the rejection letter. An embassy that does not comply with this provision is in breach of the Schengen Visa Code.

The recital also stipulates that applicants must be given access to all relevant information pertaining to their case in accordance with national law. An embassy cannot decline access to file applications unless there is a concrete provision in national law that grants them such powers.

Unfortunately, OSP lacks the capacity to research, evaluate and recommend legal resources for each and every Schengen Member State. If you feel confident that you can understand the legal language of your destination country, you should use the search engine of your choice to look for one of these terms:

plus the name of the country. This should normally give you results quite quickly. Also note that many EU countries still lack translations of their legal code into English, meaning you will likely be forced to consult with your inviting party or anybody else willing to help you translate, unless you’re already familiar with the language of the country you plan on going to.

Once you have found the relevant law you should find out if and how it grants you access to your visa application file. The reason why you would want to do this is that you can obtain the original document written by the case officer to justify the rejection of your application. This document must exists in every file, as otherwise the embassy would not be able to justify their decision in court.

Another reason for looking into the above mentioned laws is that they can tell you how much time an embassy may take to respond to and comply with your application. If the embassy exceeds this time frame without an urgent reason, you can then file a motion in an administrative court, meaning the embassy will possibly be fined or otherwise forced to comply by a national judge.

how to go about it

OSP highly recommend applicants to make all of their applications in writing. This way, the embassy can later on not deny having accurate knowledge of your demands.

Writing a letter with a letter head, date and reference number is also preferable over writing a simple e-mail, as it gives off a more formal and distinguished appearance, which is normally taken more seriously. You do not have to send the letter as a physical copy, though; appending it as a PDF to a short e-mail is normally entirely sufficient unless the national administrative laws of your destination country state otherwise.

When applying for access to information it is recommended that you always use formal, businesslike and respectful language when dealing with Member State Embassies. Do not be afraid to express that you believe that the authorities have violated your rights, but at the same time always do so in a as unemotional and impersonal language as possible.

In short, your letter should address that you found the embassy’s explanation for your rejection to be unsatisfactory. You should then go on to explain why you believe the reason for rejection to be insufficient and refer to recital 15 of regulation 2019/1155 (EU) about your right to more detailed information. Optionally, this can then be supplemented with references to all relevant national administrative laws that the embassy has to observe. Lastly, you should demand copies of the responsible officer’s decision statement to learn about the full reason for your rejection. Mind however that this document is unfortunately normally written in the official language of the destination country and the embassy may not be legally obliged to provide a translation.

It is very important to note that if you plan to appeal the rejection notice via remonstration (administrative appeal) or via judicial appeal you must still respect the deadline for doing so. The fact that the embassy did not provide you with sufficient information does not in any way affect that duty. However, you will of course want to know the full reason for your rejection before writing your appeal statement. The proper way to address that issue is to send a second letter to the embassy, in which you outline your intention to appeal while also noting that you will only provide a full statement once you have assessed the contents of your case file.